So, I went to a creative writing retreat in Luray, VA with my daughter, who is also a writer. It was her first experience at a retreat; I’ve been to a few before, but not like this.

I’m used to a retreat that focused on the writing – but this one didn’t. It was called a creative retreat, and boy was it. It was about crafting and art – using another art to spur on your writing.

Our hostess was a published author who was also a scrap-booker – and that is what I did – well, sort of. Using scrap-booking techniques, I made pages for my characters. I wanted to focus on the dad in a manuscript I’m working on as he was giving me trouble, but I practiced on the characters I thought I knew.

Yup – the ones I thought I knew.

This process showed me things I didn’t know about those characters (Cat likes blue and the ocean), and after I knew more about them, I was able to work on the dad’s page, and boy did I learn about him.  I cut stuff from magazines that spoke to him, and found out he was brown. 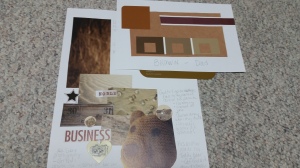 This turned out to be very important.  I also found that he likes old stuff, because he grew up with his grandparents who were poor and they died with very little to show for their lives.  And that is a big motivator for him and a big source of the conflict with his daughter.

You’ll have to read the book when I publish it to find out about the teddy bear.  🙂

Now, back at home, I’m another few thousand words back into the manuscript, having deeper knowledge of all of my characters.

I am very happy to have found one more way to learn about my characters.  You should try it, too.